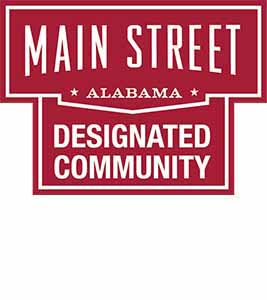 Citizens of Headland who made this possible!

Mayor Ray Marler announced on Monday, June 3, that Headland has been selected as a Main Street Alabama city. Thanks to the efforts of the Heart of Headland downtown group, City of Headland and Headland Area Chamber of Commerce, Headland now joins a statewide effort to build stronger communities through effective downtown and neighborhood commercial district revitalization. Main Street Alabama, a non-profit organization that uses a national model with a 40-year track record of success, designated Headland after a rigorous application process.

Helmer added that the interview panel was impressed by Headland's presentation that demonstrated a love of their community, a vision for what they could be, and the drive to make it happen. She noted that Headland demonstrated passion for their downtown and had recognized Main Street principals could elevate the current efforts in their district, which made them stand out in the field of applicants.

The announcement made on social media stated:

“It’s easy to love a place that shares its heart. Love letters for this hometown came pouring in from all over the state proving that what happens #UnderTheOaks doesn’t always stay under the oaks! This community, once known as Head’s Land, was laid out by James Joshua Head in 1871, and included a public square, storehouse and both residential and commercial lots. The public square, which is anchored by a gazebo and the first example of public art in the county, a statue called “Spirit of the American Doughboy”, is the home for community events and activities. With the addition of the railroad in 1893, the community became the heart of the cotton, lumber and eventually, peanut processing industries. They call their downtown their heart and we want to share in the love! So, Headland, and three other communities join Alexander City, Anniston, Athens, Birmingham, Columbiana, Decatur, Dothan, Elba, Eufaula, Florence, Foley, Fort Payne, Gadsden, Heflin, Marion, Monroeville, Montevallo, Jasper, Opelika, Oxford, Scottsboro, South Huntsville, and Wetumpka and in using Main Street's comprehensive and incremental approach. Each Designated community listed above reports their success by tracking their reinvestment statistics. Main Street Alabama’s Designated communities have reported 379 net new businesses, 2,364 net new jobs, $303,975,745 in private investment, $83,284,171 in public improvements, and 78,992 volunteer hours in their districts collectively since June of 2014.