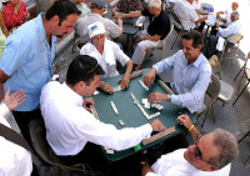 Since 1976, the Annual World Championship Domino Tournament has been held in Andalusia, Alabama. The City of Andalusia and the Andalusia Area Chamber of Commerce join the Andalusia Rotary Club in welcoming you to this family event. More than $500,000 in prize money and trophies have been awarded since the Domino Tournament games begin in 1976. Playing dominoes in this tournament guarantees fellowship, fun and competition.